REKLAM ALANI
SİYASET
0
A+
A- 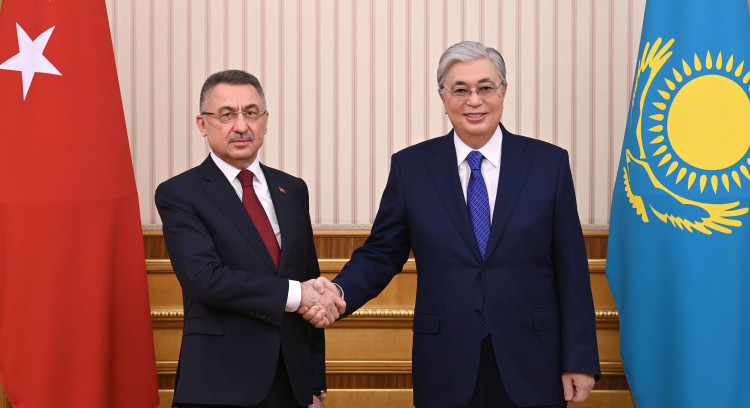 Kassym-Jomart Tokayev and Fuat Oktay discussed the prospects for the development of the Kazakh-Turkish strategic partnership and pressing issues of the international agenda.

Welcoming Fuat Oktay, Kassym-Jomart Tokayev conveyed warm wishes to Turkish leader Recep Tayyip Erdogan and noted that he was pleased to accept his invitation to visit Turkey in the coming May.

President Tokayev noted an excellent level of bilateral relations in the political, trade, economic, investment, cultural and humanitarian areas and stated the need for further enhancement.

In turn, the Vice President of Türkiye conveyed greetings from President Erdogan to the Head of State and the people of Kazakhstan. He added that Turkey is looking forward to the visit of the Kazakh leader.

Fuat Oktay also conveyed to Kassym-Jomart Tokayev a congratulatory message from the Turkish leader on the 30th anniversary of the establishment of diplomatic relations between Kazakhstan and Turkey.

Turkish Vice President commended the measures taken in our country to overcoming challenges and implementing reforms under the firm and decisive leadership of Kazakhstan’s President.

In the end, Kassym-Jomart Tokayev expressed gratitude for Recep Tayyip Erdogan’s decision to take part in the 6th CICA Summit to be held in October this year in Nur-Sultan.

Go back Go back